WOWHack is an annual, 2-day music hack event which precedes Way Out West festival, and this year Spotify kindly put us up in their Gothenburg office for the event. 67 developers organised themselves into 25 teams, and spent 2 days building cool music-related hacks.

My hack was called “Robot-Sara”, and this is a pretty accurate description of how I went about building it (a quote from my hack presentation):

"I basicly super glued my iPhone to the robot" #wowhack2014

I love Spotify’s Discover feed, and it works great when you’re using your laptop or mobile. Driven by a fascination with robots and human-computer interaction (and heavily inspired by Jibo), I wondered if I could try and build a more interactive and personal way of consuming music recommendations based on my Spotify listening habits. I built Robot-Sara, a recommendations robot – here’s a quick demo:

After having the initial idea for this hack, I fleshed-out the core functionality I wanted to be able to support:

After a bit of brainstorming, I came up with this (very sketchy) sketch: 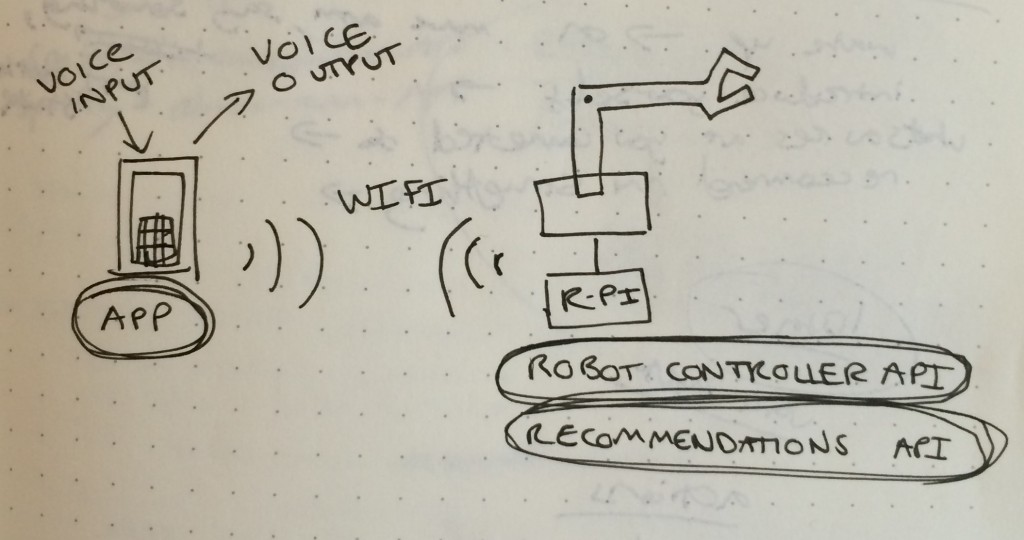 Note: In my sketch, I envisaged the robot controller API and recommendations API running on a Raspberry Pi (“R-Pi” in the diagram) – after fighting with flakey WiFi on the Raspberry Pi, this was eventually replaced with the services running on my laptop.

Robot-Sara consists of the following software and hardware:

I wrote a simple iOS app, with text-to-speech, speech-to-text, and audio playback capabilities. After playing around with the native text-to-speech and speech-to-text support in iOS, I settled on a third-party SDK by Nuance, which (in my opinion) gave more accurate speech detection results, and had higher quality voice synthesisers. I also integrated Spotify’s beta iOS SDK, to allow for audio playback.

The core design of the app involved a “brain” and a collection of “skills”. Once a user has uttered a phrase, and the speech-to-text library has processed the audio and returned a result, the phrase gets passed to the “brain” class for processing.

The brain is responsible for being aware of all supported skills, finding a skill for an uttered phrase, and requesting that the correct skill performs an action for a phrase.

The base “skill” class has the following properties and methods:

Each skill implements it’s own set of supported phrases – these are the phrases that will cause a skill to be actioned. For example, the “WakeUp” skill has the following phrases:

The canActionPhrase method is implemented in the base skill class, and iterates over each skill’s phrase, performs fuzzy string matching between the uttered phrase and the skill’s supported phrases, to see if a close (enough) match is found to action the current skill.

For example, if the user utters “Sara wake up please”, the WakeUp’s phrase “sara wake up” has a fuzzy match of 80%. This is above the minimum fuzzy match threshold required to be sure a skill can perform an action for a phrase, and will cause the WakeUp skill to return TRUE for the “canActionPhrase” method. When this happens, the brain has successfully found a skill for the phrase, and requests that the skill “actions” the phrase (with a call to the skill’s “actionPhrase” method). In this example, the WakeUp action involved telling the robot arm to lift up and rotate, and then tell the app to say “Hello Aaron”.

This is a simple web-service (using Sinatra), running on my laptop, which uses the Last.fm user.getTopArtists API to get my favourite artists based on scrobbles from Spotify. With that information, it hits EchoNest’s similar artist API to recommend artists based on my listening habits. It has a single “/recommendations” endpoint, here’s an example response:

When a user requests a recommendation from the app, the app makes a call to the recommendations service running on my laptop, and the required data is returned. The app can then use the recommended artist name returned to find a popular track for that artist on Spotify, and stream a 15 second preview via the Spotify iOS SDK.

Another simple web-service (using Sinatra), running on my laptop, which allows for controlling the robotic arm via an API. Using a robotic-arm driver I wrote at a previous hack day, I created a single endpoint “/perform_action”, which accepted “action” and “seconds” parameters, e.g.

which would move the robotic arm’s should up for 1.5 seconds. I also created 3 pre-programmed actions for common tasks:

When a user requests an action that involved movement from the robotic arm, the skill class responsible for that action (e.g. WakeUp), will call the robotic arm API running on my laptop, and the arm will spring into life.

This is a simple OAuth token swap service, which the Spotify iOS SDK beta requires as part of the OAuth exchange process.

The arm formerly known as Hipster-Robot, a dead-cheap, DIY robot arm I bought from Maplins and built in a couple of hours at a previous hack day.

I wanted an “action word” that could be programmed into the robot; a keyword that the robot could use to determine if a user was talking to the robot, or someone else in the room.

After a very unscientific experiment on some popular names, “Sara” and “David” appeared to be names the speech recognition library could consistently and accurately detect. From there, I tested the vocaliser libraries – the female voices were of a much higher quality than their male counterparts, so “Sara” it was.

With a very small amount of effort (and even less imagination) this became “SARA”, a backronym for Spotify Automated Recommendations App.

For this event, we submitted to private Github repos setup by the organisers – I’ll upload the code to my own Github page in the next day or two.